Over the past few years, SkyStream has really upped their game. What started out as a budget hardware company has quietly grown into a powerhouse Android TV box company.

I’ve been a fan of SkyStream Android boxes since way back in 2014 when I first reviewed the SkyStream X-4. A big part of that is because the company is local to me here in Orlando and I got the opportunity to meet the founders, Pete and Phil.

Back then it was just the two of them in a rented office, but since then they’ve grown into a full-fledged operation with a dedicated developers and customer service team.

So when I decided to start writing about Android TV boxes again, there was really only one option to look at first: the new SkyStream Pro 8K streaming media player.

I’ve had the opportunity to use the SkyStream Pro as my primary Android TV box for about two weeks now. In this review, I’m going to talk about my thoughts and go over some benchmark numbers. I’ll also look at what’s different from their previous Android box (spoiler: it’s A LOT!).

Finally, we’ll look at who should buy the SkyStream Pro and who might want to give it a pass.

SkyStream Pro vs. SkyStream 3 Plus

On paper, the SkyStream Pro looks to have slight increases in CPU clock speed and graphics performance, but that doesn’t tell the whole picture.

To help figure things out, I turn to my go-to resource for breaking down the ins and outs of computer architecture, CNX Software. Personally, all I need is the highlights of what’s changed from model to model, but If you really want to geek out on the minute changes, I highly recommend giving them a follow.

One of the biggest upgrades that you won’t see on the spec sheet is in the S905X3’s Neural Processing Unit (NPU). That gives it better performance processing voice commands.

So, if Google Assistant is important to you, the SkyStream Pro 8K will handle those voice commands better than its predecessor.

Unboxing Android boxes used to be a bigger deal than it is now. Honestly, almost everyone gets their packaging right so it’s hard to differentiate yourself.

Still, SkyStream does a really good job with the packing on the SkyStream Pro 8K streaming media player.

The box itself is full of high-quality images that give you a lot of information on the TV box before you even open it up. Inside the box, you’ve got the same bright red cardboard that neatly frames the black TV box.

The SkyStream Pro 8K is a small rectangular TV box made entirely of plastic. It has the typical curved off edges that the Apple TV made popular a few years ago. The top of the box has a nice textured feel to it, which is a bit like brushed metal. The front looks to be a smooth black plastic, but it’s actually a heavily tinted clear plastic so that the blue LED clock can shine through.

On the back, you have another USB 2.0 port, a digital optical port, AV port, HDMI port, an RJ-45 Ethernet port and the power port.

The voice remote control fits nicely in your hands, but it feels a little thin and flimsy. You’re never worried about breaking it, but there is some flex to it when you pick it up. It’s very similar to most of the other remotes that you find on Android TV boxes, but it would have been nice to find something with a little weight and rigidity to it.

It doesn’t take too long to get used to, but if you find yourself switching between different remotes in your house, you could inadvertently turn down the volume when you mean to exit out of an app.

The remote also has a couple of special function buttons which are really handy.

My favorite is the Apps button that will take you directly to the App Drawer. There are also specific hot buttons for YouTube, Netflix and Google Play. While the YouTube and Netflix buttons worked perfectly, I wasn’t able to launch the Google Play Store with the remote hot-button.

I’ve talked about the SkyStream Updater in a different article, but I’ll briefly highlight the important parts here as well. If you want to get more details, including how to keep your SkyStream TV box updated with the latest addons and firmware, I highly recommend checking out that article.

The SkyStream Updater app, as the name suggests, is a one-button method to keep your SkyStream device up to date. It’s also a great way to set up your TV box with various apps, depending on how you use it.

A few years ago, you used to be able to find a lot of Android TV boxes that came “fully loaded” from the manufacturer with what they thought were the most popular applications. The trouble is, most people didn’t agree on what the most popular apps were. That led to people having a ton of apps on their device that they never used, which was confusing to some people.

SkyStream came up with the Updater App which lets them ship the SkyStream Pro with as few apps as possible and then let you choose how you want to configure it.

That way, if you want a bare-bones Android TV box, you’ve got it. But if you want a fully loaded Kodi box with all of the most popular add-ons, you can get that too.

It’s really a great solution and it’s only gotten better over time.

Coming from the Nvidia Shield TV, the SkyStream Pro felt incredibly familiar. Both devices run the official Android TV operating system which is perfect for your living room.

Navigating around the menus felt smooth and snappy. I never felt like I was waiting on the device to catch up to me.

Watching videos on YouTube or Netflix was extremely smooth, with no digital artifacts. If I ever find any kind of artifacts when I’m watching a video, that, to me, is a deal-breaker. The SkyStream Pro 8K streaming media player definitely gets some points in that aspect.

A Word About Benchmarks

If you’ve read any of the reviews I’ve written on my old website (see my About page for details), you’ve probably seen me list off a lot of benchmark numbers. While having the bragging rights for the highest AnTuTu score is all well and good, I’ve found it doesn’t necessarily translate to watching a movie in 4K.

In that spirit, I won’t list benchmark scores unless they’re really extreme one way or the other. I find it’s much better to try to log as much time watching movies and TV on a device as possible. Isn’t that much more important to you anyway?

The SkyStream Pro is priced around $129, which puts it on par with some of the higher-end Android TV boxes from Minix or Beelink. It’s still cheaper than the basic Nvidia Shield TV and almost $80 less than the Shield TV Pro.

Quality has always been great with SkyStream, and from what I’ve seen of this TV box, it’s no exception.

The Verdict: Is the SkyStream Pro Worth It?

I had really high expectations for the SkyStream Pro when I bought it and it didn’t disappoint!

Moving to the official Android TV OS is a huge step in the right direction. Even though the older SkyStream boxes had custom launchers that tried to replicate that “sitting on the couch” experience, flipping around Android TV is just so much easier and more enjoyable.

The hardware on the TV box is a moderate step up from the older SkyStream 3+. If you have one of their older boxes and you’re expecting a blinding speed increase, you’re going to be disappointed. However, if you want a snappier interface that really makes it easy to find the TV shows and movies that you’re looking for, then this is the TV box for you.

You can buy the SkyStream Pro 8K streaming media player on Amazon, but I always recommend going directly through SkyStream’s website. You’ll get the same lightning fast shipping and better access to their customer service department that way.

The SkyStream Pro 8K is a fully-loaded box running the official version of Android TV. It takes the guesswork out of setting up your streaming device and gives you tons of free shows! 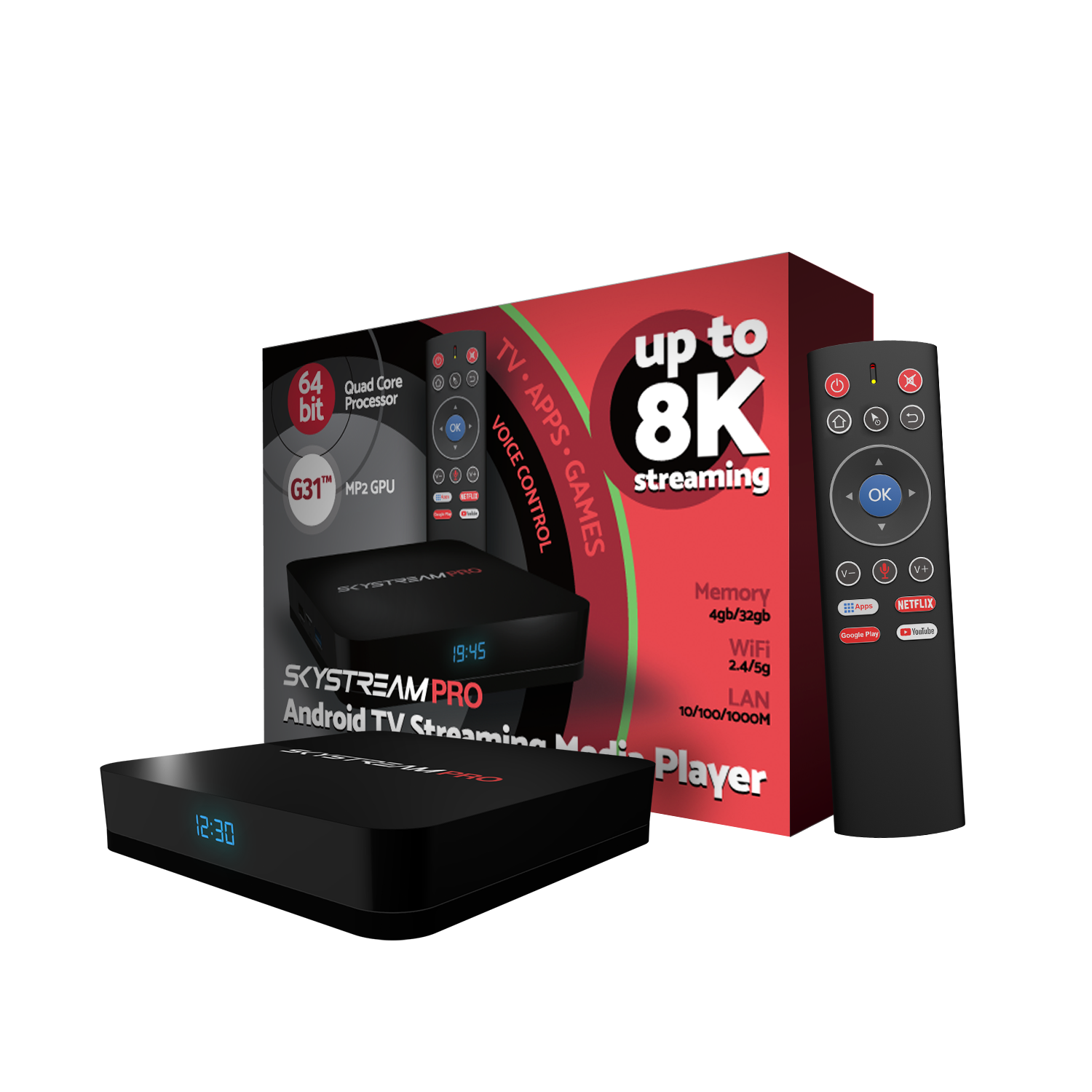 Buy Now
Learn More
We earn a commission if you click this link and make a purchase at no additional cost to you.

link to MINIX NEO T5 Review: Is It Better Than the Mi Box S?

Over the years I've owned several MINIX Android boxes, but the biggest drawback for me was that they were running pure Android. So I was really excited when they finally released the MINIX NEO T5...

Continue Reading
link to MeCool KD1 Android TV Stick Review: How Good is it for 4K?

For me, testing out a new Android TV stick is kind of like getting back to my roots. So I was pretty excited to test out the new MeCool KD1 TV stick. I've actually been using it for a little more...